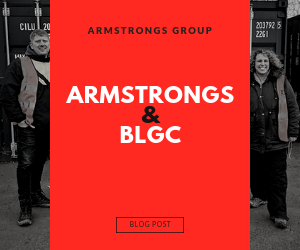 We wanted to get involved with the Bolton Lads & Girls Club as we always want to give back to the community and do whatever we can to help. We had visited them previously towards the end of 2018 to see how we could get involved with supporting them. It was suggested that we could support their “Get A Job” initiative. The initiative sees a group of local young people go to local businesses. Here they will see what employment opportunities are available and how you get into those opportunities. On Wednesday 13th February we had the privilege to welcome the first cohort from BLGC to our Montcliffe Quarry.

A day with Bolton Lads & Girls Club at Montcliffe Quarry

Up at Montcliffe quarry, we met with the BLGC cohort at 10.30am. After a quick health and safety demonstration we set off into the quarry.

At first, the young cohort was shy but as soon as we got into the quarry they started to get involved. They saw first hand the full aggregate production process. We had just had a blast that yielded 4 thousand tonnes of stone that very morning. They witnessed an excavator loading up the dumper truck. This then transported the stone to the other side of the quarry. At the other side of the quarry we stood for nearly an hour taking in the surroundings. We watched on as the dumper truck deposited the stone.

Once the crusher had crushed the stone into aggregate it was then transported by a wheel loader to be screened. Our young cohort watched on as the screener separated the stone further into piles, sorting them by size. Finally another wheel loader would load our tipper wagons with the crushed aggregate as they arrived, ready to transport them to their next locations, such as our AMIX concrete plant.

Up Close With An Excavator

We stood in silence for a while watching the process before getting up close with a Hitachi Excavator. We took a look at the cab, as well as the size and a variety of attachments for the hydraulic arm. 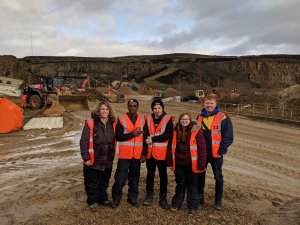 All of a sudden it was as if we had a different set of young people with us, they had come out of their shells. The young cohort had started asking questions, telling us about their interests and showing a genuine interest in our quarry. At this moment we asked them what their ideal job in the quarry would be. The resounding answer was to be an excavator operator. However this was just because of how fun it looked to drop the metal ball from such heights!

Carly, who is a member of BLGC, said “I learned a lot about the history of the quarry and all the uses for the stone and rocks that are produced”

On the way back we were treated to a drive by from Mayson and we shared the history of the fantastic machine along with a quick history of our other 70 wagons.

For us, it was important to highlight the jobs that we have on offer. As well as the jobs that make our business operate as smooth as possible. Not only do we have workers in our quarries but also in our head office too. At our quarries we have jobs ranging from drivers to ground workers. At our head office you can find HR, Accounts, Transport, sales and marketing teams.

A Meeting with the Blast Master

Once we had made it back to the start of our tour we were treated to a hands on blast master class from our blast master, Alan. 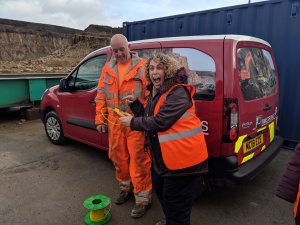 Alan has been the blast technician at Armstrongs for 4 years but has over 20 years experience in quarrying. On the day of the visit from BLGC, Alan had been on site preparing for our blast at 10am since 4am that morning.

Alan took the time to answer any questions about blasting the cohort had before providing a hands on demonstration. Armed with his wiring and a handy little device, he took the care and time to show how we approach a blast. Alan encouraged each one of our young people to take turns in pressing the spark button and create a mini blast through the wiring. 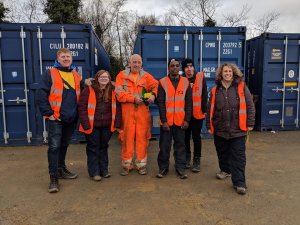 After this encounter we took the time to ask the young people if they had changed their minds about the type of jobs they wanted. It would come as no surprise that they were all firmly fixed on wanting to become our next blast master!

Charlotte, another member of BLGC, particularly enjoyed it saying “It was a fun and interesting session and I enjoyed firing the detonator and it was much louder than I was expecting it to be”.

Being firmly active and involved in our communities is something that we are proud of. We are incredibly humbled to be able to support Bolton Lads & Girls Club in their “Get A Job” initiative. After the session we asked Andy Simms from BLGC to provide some information and feedback on the initiative.

“Working with a family run local business to provide young people with an opportunity to see and experience what the business does. How it operates both on the front line and behind the scenes and also the history of the family. The stories from staff that can be told to help inspire the young people we work with is invaluable. For me it’s a more real experience for the young people who are hopefully more able to relate to these business. Id like to thank all at Armstrongs for their time in helping us on our projects with young people here at BLGC”

We’d like to thank BLGC for choosing us as one of their local businesses. They will be joining us again, with their second cohort, in early March. You will see more about that trip on our website in the coming weeks.

For more information about the support we offer to our communities you can contact us here.