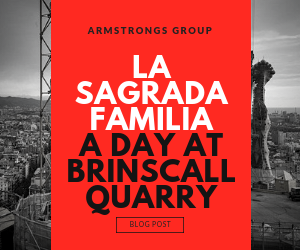 On Wednesday 5th September I had the privilege of leaving our head offices in Horwich and accompanying our Director, Emma Armstrong, to Brinscall Quarry in Chorley. The purpose of our visit was simple: La Sagrada Familia.

Earlier on in the day we had welcomed Charlie Holt from BBC Radio Lancashire to our stone workshop in Horwich. Whilst at the workshop he wanted to see how we cut and prepared the stone from Brinscall Quarry ready for collection to be sent to Barcelona. 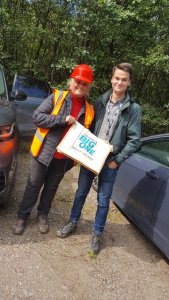 Basilica de la Sagrada Familia is  a large unfinished Roman Catholic church in Barcelona, designed by Catalan architect Antoni Gaudí. The stone used for the bell towers on the Nativity and Passion facades is sandstone from Montjuic in Barcelona. The quarries in this region were exhausted and closed many years ago thus meaning original stone could only be sourced from demolished buildings. So began a worldwide search for stone that would match that already used. It is through this process that the sandstone from Brinscall Quarry, near Chorley, was selected. It is to the Armstrongs Group pride that since being identified we have shipped many loads of faced stone to be further cut in Barcelona.

Later on in the day on the Wednesday, We invited Charlie and his digital media team to accompany us to Brinscall to see the stone, and the quarry, up close and personal. It is here where you truly get a feel for the magnitude of the project. Brinscall Quarry covers 40 acres near the town of Chorley and has been operational in excess of one hundred years. 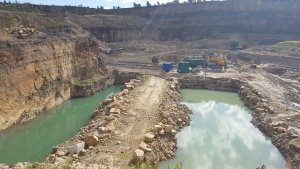 We stayed in the quarry for a good hour showing Charlie around and watching an excavator and loader. In that time they would shift close to 200 tonnes of stone. After watching the excavator closely for some time it became apparent that the way we extract the stone for La Sagrada Familia was somewhat different than other extractions. One side of Brinscall quarry had scorch marks on the rock face from previous blasts- but the other side was almost nothing but pristine sandstone. 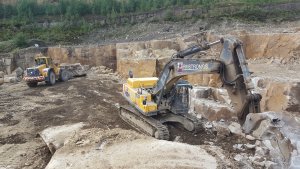 The excavator carefully dislodges the stone from the rock face with its long arm using the ripper at the end. Once the stone was dislodged the excavator would unhook the ripper, flip it over and reattach it- all without the driver leaving his cab. The stone would then be transported by the loader to higher ground ready to be picked up by one of our iconic red wagons! 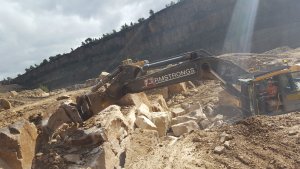 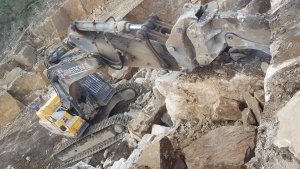 Back At Our Yard

Before the Stone is shipped to Barcelona it arrives at our stone workshop. Here our stone mason loads it onto one of our saws to cut a section off. The practice of cutting the stone allows for the architects in Barcelona to have a cross section of the stone. This allows them to assess the structural integrity of the stone and to also see the beautiful beige colouring that is so highly desired. 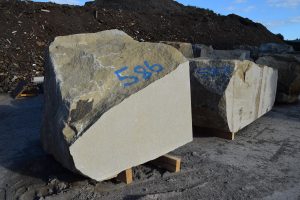 Channel 4’s Building Giants Documentary, which features the Armstrongs group, goes behind the scenes the journey our stone takes and the fascinating problems the architects in Barcelona face when building La Sagrada Familia.

For more information about the La Sagrada Familia Project visit our website here.