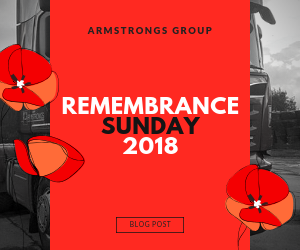 This coming Remembrance Sunday marks the 100th year since the end of the First World War. This week our staff have been using this is an opportunity to pay our respects to family members, members of our local communities and everyone who fought so bravely throughout both World War One and Two.

From everyone at Armstrongs Group, across our six sites and AMIX Ready Mix Concrete, we thank every soldier and every member of military organisations, past, present and future, for the ultimate sacrifice for our futures and freedoms.

Our Wagons and Remembrance Sunday

If you happen to come across our wagons transporting our aggregates whilst out and about you will notice they are adorned with a poppy on the cab. We are proud that all of our 70 Scania wagons and drivers are paying their respects to all those lost at war, and to all those who have sacrificed so much for our futures. 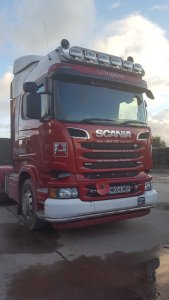 The Gallipoli Campaign was a campaign of the First World War that took place on the Gallipoli peninsula. It took place between 19 February 1915 and 9 January 1916. Intending to secure it Britain and France launched a naval attack followed by an amphibious landing on the peninsula. The aim was to capture the Ottoman capital of Constantinople (modern Istanbul). The naval attack was repelled. As a result, after eight months’ fighting, the campaign was abandoned and the invasion force was withdrawn.

In 2015 Armstrongs Group were delighted to build and donate a lasting memorial to the brave Bolton residents who lost their lives at Gallipoli in 1915. The memorial is a 6 metre high sandstone obelisk with a brass plaque detailing the names of the 236 soldiers from the 1st Battalion Lancashire Fusiliers who fell in battle. 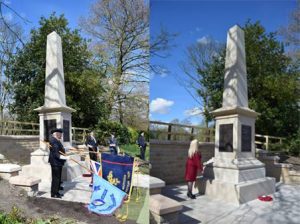 The memorial was unveiled by civic dignitaries in a special commemoration service. Emma Armstrong said “We are proud to support such a prestigious memorial remembering the fallen in our local community. We hope that many people will visit the memorial and enjoy a fulfilling and uplifting experience”

For those who are familiar with Horwich, you will know that one of the main roads of the town is De Havilland Way. Above all, It was named after the aircraft factory that was based in the town.

During the Second World war De Havilland built and supplied aircraft such as the de Havilland DH.98 Mosquito. The DH.98 Mosquito was a British twin-engine shoulder-winged multi-role combat aircraft. However, It was one of few operational front-line aircraft of the era whose frame was constructed almost entirely of wood. As a result, it should be no surprise that it was  nicknamed The Wooden Wonder.

De Havilland Way is located less than a mile away from our head office. It is a frequent route our wagons take on a daily basis.

Like many of us, you will have ancestors who were involved in both World Wars. For instance, Tracy in our accounts office is no different. Her family grew up around the area our head office is located. They lived opposite the then Horwich Loco Works, the current site of our office. Her grandfather worked tirelessly in the De Havilland factory building light aircraft for the war. Because of this on Remembrance Sunday we remember, thank and pay our respects to him and many more that served armed forces during the war. Past, present, and future.

You can find out more about us paying our respects on Remembrance Sunday and more across our social platforms on Facebook, Twitter and Instagram. For general enquiries you can email us on: enquiries@armstrongsgroup.com.